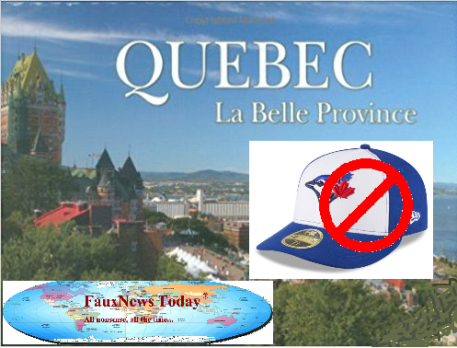 QUEBEC CITY – The Assemblée nationale du Québec has passed new legislation that will ban anyone from wearing a baseball cap, while delivering or receiving a public service, including public transit. The law, Bill 62-B (B for baseball cap) tabled in the name of “sports neutrality” will apply to public workers at all levels as well as the general public.

The new legislation comes fast on the heels of Bill 62, which bans children from wearing Halloween masks on buses as well as people from wearing scarves and balaclavas in January on ski slopes funded by the provincial government.

The anti-ball cap law was met with both cheers and boos from people across the Province of Quebec. A welder from Rimouski, Pierre Desjardins, applauded Bill 62-B.

“What’s the big deal? We don’t have a baseball team anymore since the Expos left and now people will be able to tell us from Americans.”

Roger Letellier, a postal worker from Pointe Claire is opposed to the new law. “Ils deviennent trop gros pour leur pantalon, [They are getting too big for their britches]” he said of government. “If this is a sports neutral law, that also means hockey as well as baseball. C’est une pente glissante. [It’s a slippery slope.] What’s next? Will they ban jocks and cups too?”

A spokesperson for the government who spoke off the record said that Bill 62-B “…montre que l’état est neutre, mais que nous sommes le patron et que nous pouvons faire tout ce que nous voulons. […shows the state is neutral, but that we are the boss and can do anything we want.]”   Source: FNT Staff