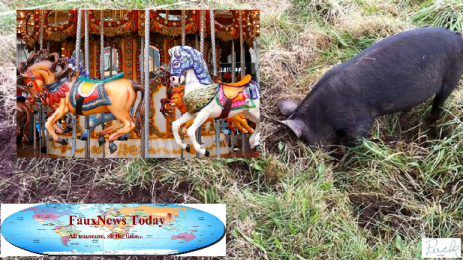 HOBART, Tasmania – In the latest skirmish of the Identity Wars, a truffle pig named Nanette has filed a class-action lawsuit on behalf of her kind, claiming “wholesale discrimination” for being excluded as pole-animals on merry-go-round carousels.

“It’s swinephobia at its worst,” she proclaimed in an exclusive interview with FauxNews Today. “I know that one or two carousel platforms years ago may have featured just a regular pig along with maybe a unicorn. But it’s always only ever been horses. Truffle pigs have never been represented!

There had initially been a hold-up as the suit was originally challenged on the grounds that a pig was a pig was a pig. However a rights group representing the truffle pigs celebrated with champagne, caviar and truffle canapés on Friday after a federal court gave the go-ahead for the class action suit to proceed.

“This is a major victory for any one of us who has ever unearthed a black Périgord,” said Nanette, adding that, thanks to the unprecedented ruling, truffle pigs would thereafter also be able to gain access to their owners’ beds, “just like some dogs, who don’t just hunt truffles, they are esteemed family pets.”

Merry-go-rounds, also known as carousels or roundabouts have been around since the late 19th century as amusement rides and in playgrounds. Nanette was forthright when she was asked why, if they felt so aggrieved, the truffle pigs had waited all these decades to suddenly file a claim.

“Well, we’ve been discriminated against for years,” she said. But in the past it’s been extremely difficult to find a lawyer who would take the case. That was then however, and this is now. Isn’t this a great country?”    Source: FNT Staff