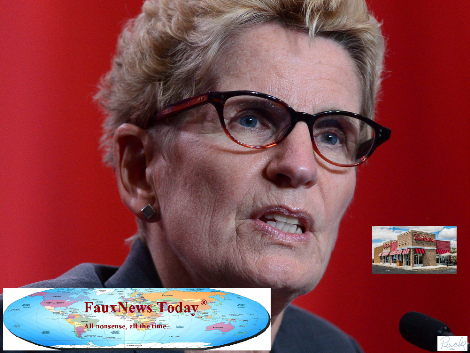 TORONTO – The premier of Ontario had harsh words on Thursday for the owners of a Tim Hortons’ coffee franchise. She accused them of bullying their staff by reducing employee benefits to cut costs, and wants them to reverse the decision.

As the head of the government of Canada’s wealthiest province, the premier apparently saw no irony in personally attacking the owners of a small-business who were taking steps to try and mitigate a 20% minimum wage hike imposed on Ontario businesses by the province.

The premier is apparently under the assumption that small-business franchise owners have the unlimited wherewithal of a government to fund their operations. The assumption is ostensibly being made because the owners in this case, who are being called “heirs” by the media, happen to be the children of the original Tim Horton franchise founders.

As one of the founders died in 1974, and the other one is still living, there is no evidence to suggest that the franchise owners are any wealthier than any other small business owner faced with a 20% wage hike, a cost that has been forced upon them by government.

The Ontario premier would seem to have it that tough, top-down decisions related to business, that might be considered bullying by some, are to remain the sole province of the Province. Source: FNT Staff 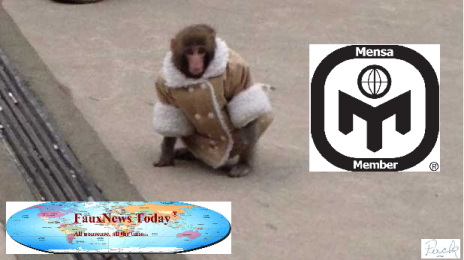 OSHAWA, Ont – After only three tries, Darwin the Ikea monkey was inducted into Mensa on the last day of 2017. Mensa, the society for people who score at the 98th percentile or higher on an approved intelligence test, was founded in Oxford, England in 1946. Darwin is the first Japanese macaque to join the elite organization.

As a non-political being, completely free from racial and religious distinctions, Darwin easily met the basic criteria for membership. His escape from a locked crate in a car in a Toronto Ikea parking lot demonstrated that he was a fellow with above average intelligence. Getting his scores up into the Mensa stratosphere was slightly more challenging, but he proved himself worthy with two other astute moves that won high praise from his test supervisors.

The first was getting out of the madness of Toronto and settling down in a free, all expenses-paid sanctuary outside the city. The second was allowing himself to be weaned off human contact, an arrangement that showed he wasn’t willing to be held back by a species that has shown itself clearly to be of inferior intelligence in that it won’t stop making war on its own members. Source: FNT Staff