TORONTO – The Ontario government has announced a radical new plan to save energy and reduce the carbon footprint for the province. Beginning in January 2018, select Ontario cities will be moved significantly closer to each other to reduce the commuting distances and commute times between them.

Several cities have been identified to be part of the GE Plan pilot project. These include Toronto and Hamilton, Sudbury and North Bay and Kenora and Thunder Bay, which are all strong candidates to be squeezed closer together to reap the many benefits projected by the government planners.

Queen’s Park held a media briefing to announce the ambitious new plan. The atmosphere was electric with excitement as journalists were encouraged to mingle shoulder to shoulder with government insiders around a tabletop model that had been set up to explain the concept.

The model showed that the GE Plan would achieve the most dramatic results by moving Kenora and Thunder Bay toward each other by several hundred kilometres along the Trans-Canada Highway. One of the architects had shown as a “win-win-win” side-note that this would have the added advantage of including the township of Ignace, which would be captured within the new footprint of the two cities.

A skeptic who publicly pointed out that moving Thunder Bay would also necessitate dredging out an inland basin of several million hectares to extend Lake Superior was first pooh-poohed and then ostracized by his fellow bureaucrats. He was then forcefully separated from the glass of chardonnay and cheese canapé that he was holding and quickly hustled out the door into the street.

The divertissement temporarily clouded the spirit of the event, however after the cynic was ejected the buoyant atmosphere was restored. Diligent reporters were able to catch snippets of self-congratulatory conversation by the remaining officials who spoke among themselves in unguarded moments.  “Absolutely brilliant!, “It will save Ontario millions, even billions!” and “It’s the greenest plan yet!” Source: FNT Staff 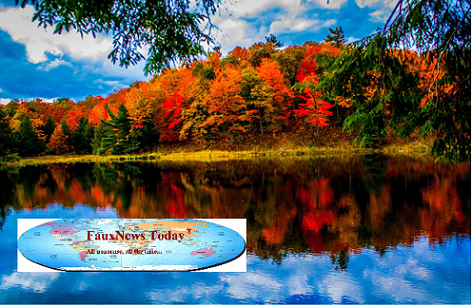 QUEBEC CITY / TORONTO – In a rare display of bureaucratic unanimity, two Canadian provinces issued public hazard warnings today about the dangers of viewing this year’s fall foliage, without appropriate eyewear. Leaf experts in Ontario and Quebec had alerted the provincial governments that the colours of the foliage this year were exceptionally vivid and a potential health hazard.

“We can’t take chances with public safety when the colours get this bright and laser-sharp,” said Alfred Ottenburg, a spokesperson for the Ontario ministry of moss and foliage in Queen’s Park. “Too many people wound up in the hospital with eye damage three years ago when they viewed the foliage without government-approved leaf goggles.” Ottenburg stressed that the leaves had also been unusually “intense and vivid” in 2014.

Jean-Paul Carboniere, who is with le ministère des feuilles et de la mousse in Quebec City, echoed Ottenburg’s stern caution.  “We’re here to protect people from their worst impulses,” he said. “Here in Quebec, there are massive leaf-watching events every weekend.  Eye damage from looking directly at the fall leaves in their colourful totality, can be dynamite!”

As yet, there are no federal regulations that prevent people from viewing unsafe fall foliage.

Both Carboniere and Ottenburg advised that if leaf peepers were careful to wear protective eyewear, there would be no danger. Speaking for both ministries, Ottenburg emphasized that leaf-peeping goggles were available from their respective provincial organizations for $895.00, plus sales tax.

“Or you could get them at Wal-Mart for $3.49,” he said, but they’re not government approved.”  Source: FNT Staff