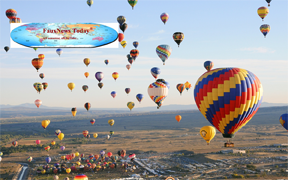 OTTAWA – After three weeks of intense negotiation over jurisdictional and other issues for legislating speed limits for hot air balloons, nothing has been settled between the City of Ottawa and the Province of Ontario.

A spokesperson for the Province, Eugene Vaillencourt, was quick to counter this assessment however. “We’ve agreed on nothing of the sort,” he scoffed. “I mean the lower speed limit, yes, a quarter of a kilometer per hour is fine, or the balloons would simply fall out of the sky.  But a hundred and sixty kph at the top end is far too high to set the maximum. That would only apply in hurricane season, and such.”

The negotiations were also set back when a representative from Transport Canada, who arrived late to the meeting, suggested that the regulating standard should be set in knots, not kph.

As the all-day session finally ground down and broke up late Friday afternoon and all parties headed off for the weekend, MacKenzie was caught by a reporter in an unguarded remark he made at a Tim Hortons near City Hall.

“It’s not about the speeds at all,” he grumbled. “It’s about who gets to collect the fines. In the end it’s always just about the money!”   Source: FNT Staff