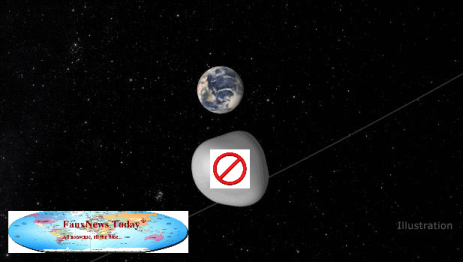 OTTAWA – The federal government responded instantly today to rising public concerns that possibly a rogue asteroid would pass dangerously close to Earth on Thursday. It snapped into action and banned the space rock from entering the atmosphere in Canadian airspace.

“So Canadians can rest easy in their beds tonight,” said James Warrington, a spokesperson for the aerospace sector of Canada’s ministry of public safety. “The thing was definitely a potential hazard but it can’t come anywhere near us now because it will be against the law.”

He was referring to Asteroid 2012 TC4, a hunk of space debris with a diameter the length of a railway locomotive. A number of experts had advised that the asteroid would pass the planet inside the moon’s orbit, but would miss Earth by 50,000 kilometres. The government, however, was taking no chances.

“I mean, 50,000 kilometres is just a tiny drop in the big bucket that is space,” said Warrington. “That’s much too close for comfort. Remember what happened to the dinosaurs. And MPs had phone calls and e-mails from nervous constituents all across the country who were worried about a collision. So the legislature met in an emergency session and the government took the necessary action on behalf of all Canadians.”

Prior to Thursday’s ban, there were no federal regulations that prevented asteroids from crashing to Earth on Canadian soil. Warrington called the legislative sanction “unprecedented” and “a major Canadian step in planetary defence and public safety.”

He offered no assurances however when asked about how the wayward space rock might affect Canada’s close neighbor, the United States.

“Well, they’re our good friends and all, but Canada can’t lose any sleep over what might happen in another country,” he said. “If they think there’s any danger, they can pass their own law banning it there.” Source: FNT Staff