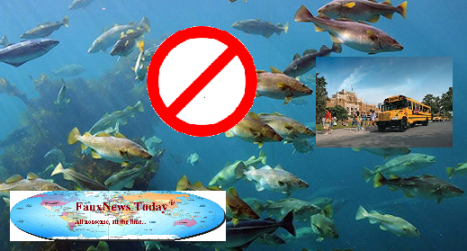 ST. JOHN’S, NFLD – A furious fracas has broken out between a lobby group representing public school teachers from Toronto and Canada’s fishing industry. The teachers claim that the fishing industry has stolen a term, “school”, that is specific to their bailiwick. The federal government has stepped in to act as an arbiter.

“We can’t have these people from the fishing community misappropriating words,” said Belinda Fieldson, a kindergarten teacher from North York, who was carrying a sign that read ‘end the word-murder’. Roger Ainsworth, who teaches grade ten geography at a downtown Toronto school agreed with his colleague.

“Everyone knows that a school means children and buses and healthy lunches and things like that. I mean, does a school of fish make any sense at all?”

Ainsworth also had a picket sign that read ‘some words hurt.’ The two, who called themselves “Cultural Appropriation Activists”, were part of a group of twenty or more teachers picketing near the St. John’s Port Authority. They said they had taken a paid leave of absence from their jobs to be there.

The decision by the teachers to picket in St. Johns was apparently ‘triggered’ by a Toronto District School Board action that ruled certain words off limits, especially in Canada’s largest city.

“We take charges like this extremely seriously,” said Douglas Thornbury, an accredited mediator who works for the federal department of cultural misappropriation in Ottawa, which was set up recently to handle an increasing influx of complaints.

Thornbury said that it was possible that there was “micro-aggression” involved with the misuse of the word ‘school’ and if that was proven to be the case, “there could be a ripple effect. There are public health implications to consider.”

“We are talking trauma counseling here, at the very least, and maybe worse” he said.

The picketing teachers are demanding an apology, an official name change to depict a body of fish in Canadian territorial waters and financial recompense for what they say are “years of misappropriation.”

Robert Parsons, a St. John’s native and commercial fisherman, was asked for a comment while he was stocking his trawler for a trip to the Grand Banks. He pointed out that both the teachers group and the federal government arbiters were being paid with public funds and that he didn’t have a lot of time to talk because he “had to go out and earn a living so he could cough up the taxes that paid their salaries.”

“Some people,” he said, “have too much time on their hands.” Source: FNT Staff