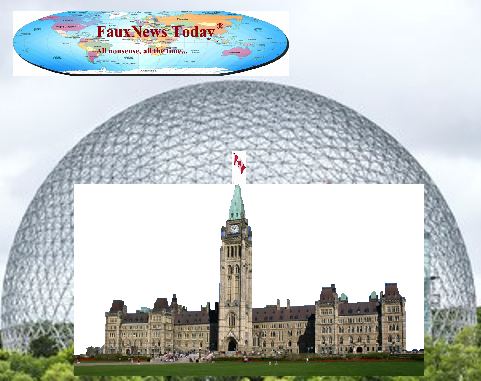 OTTAWA – An architectural engineering firm from Tuktoyaktuk, NWT has been awarded a federal contract for $3.5 million to draw up a design and blueprints for a proposed glass-covered dome over Parliament Hill in Ottawa.

The government unveiled its proposal for “Hilldome on the Rideau” today as part of its GreenEnergy 2050 initiative. Scott Archambault, the CEO of Dreamscape, Scapegoat & Associates Inc., the Canadian company that was awarded the winning bid, was on hand for the announcement.

“We’re thrilled to pieces about this,” he said. “Now Ottawa can hold its head up with the really great cities of the world that have domes, like Toronto, Montreal, Milwaukee, Houston, Dubai and almost Winooski.  And we promise that it will be built with 100% Canadian content.”

Hilldome on the Rideau will be different than some of the large, well-known urban domes in that it will not have a retractable roof. Archambault explained that: “they’re really quirky and tend to stick and hang up when you don’t want them to, like the convertible top on my eighty-six Mustang.”

The 950,000-square-foot dome will be fully climate-controlled however. Archambault pointed out that it won’t need heating in the winter and the plans call for the glass panels to be completely removed for the summer months.

“That way we save big-time on air-conditioning, which you don’t really need in Ottawa even in July,” he said. “And the glass panels have to be washed anyway. So, we kill three birds with one stone. Oops, forget what I said about the stone.”

The official opposition has expressed concerns about the contract, mainly the cost.

“Well, part of that three point five mil is for learning on the job,” Archambault said. “We’ve actually never designed one before, but how hard can it be?” Source: FNT Staff