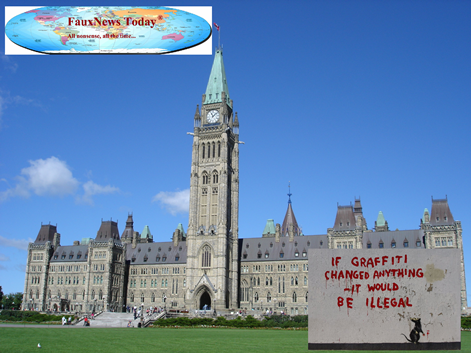 OTTAWA – The Canadian government has commissioned the reclusive British urban graffiti artist Banksy to create an original work to be permanently displayed as a giant mural on Parliament Hill in Ottawa. The move comes as part of a federal campaign to appeal to a young, more cynical citizenry by presenting government as “hip”, “with it” and fully in touch with popular culture.

The $2.1 million dollar contract for the unusual commission, which features an image of Banksy’s signature rat, did not go through the normal government procurement process.

“We back-channeled it directly with the artist,” a government staffer explained. He did not want his name used but spoke of the exclusive cultural coup to FauxNews Today off the record, as a point of pride. “Not an easy person to get to, let me tell you.”

Banksy is world-famous almost as much for his closely-guarded anonymity as for his satirical creative output. Details of the contract were leaked to the media however and the commission has stirred a tripartite controversy.

The official opposition in the House of Parliament has denounced the secrecy behind the unorthodox purchase and is clamouring for an investigation as to why it was not tendered on MERX for public competition. The Canada Council for the Arts has decried it for lack of Canadian content. And a house painter from Saskatchewan named Alistair Yanovski complained about the cost.

“I could have done it for five-hundred bucks and a round trip airline ticket from Saskatoon,” he said. “And if they were going to use a rodent as a symbol, it should have been a Canadian beaver.”

The controversial mural does have its supporters however. A woman waiting for a bus on Wellington Street who said her name was Sarah, compared the newly commissioned Banksy installation, to his “Stonehenge“, which was constructed from portable toilets.

“At least,” she said, pointing at the Parliament Hill mural, which is eighty feet long and forty feet high, “This one is in good taste.” Source: FNT Staff