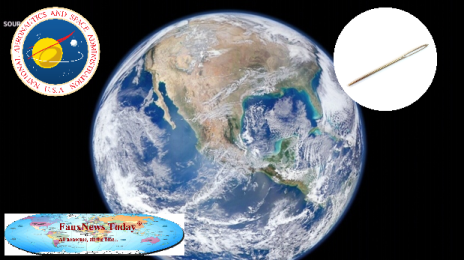 HOUSTON – In a move on Friday that was both praised and pilloried, the National Aeronautics and Space Administration announced that it will be sending a giant darning needle into space to patch the hole in Earth’s ozone layer. NASA said that it was taking action now because the ozone hole has shrunk to its smallest size in almost thirty years.

“We’ve been aware of that unsightly hole for years, of course,” said David Gemison, NASA’s Chief Space Needle Engineer from his satellite office in Seattle. “But now it’s finally shriveled down to a manageable size that we can mend, and still stay within our annual budget.”

The news rendered the National Darning Needle Association agog with delight. Within hours of the NASA announcement, the NDNA issued a media release commending the space agency on what it called a “pioneering initiative that opens many doors into the future for our industry.”

“Hardly anyone darns and mends with needles anymore,” said Mary Thornstein, an NDNA spokesperson. “So we sent NASA a proof of concept for the mission and I guess the timing was just right. This gives our industry a terrific shot in the arm. It’s wonderful!”

The unusual NASA project was not without criticism however. The World Velcro Guild (WVG) called it a “pathetic old fashioned approach” and a WVG spokesperson sniffed that it was “shamefully late”.

“That embarrassing abyss over the pole could have been covered up years ago if they had opted for a patch with hooks and loops,” said Raul Emerson, the WGV’s Chief Fastening Officer. “But the cheapskates didn’t want to spend the money.”

NASA’s Gemison acknowledged that budget considerations had played a part in the delay to cover the hole, but also said that for such critical work in space they had “wanted to stay with the tried and true.” He also claimed that one of the reasons that NASA went with the giant needle mission was that the NDNA’s research and development program with large needles was “just spectacular.”

“Now we’re working with them on another innovative new procedure for mending black holes,” he said. Source: FNT Staff