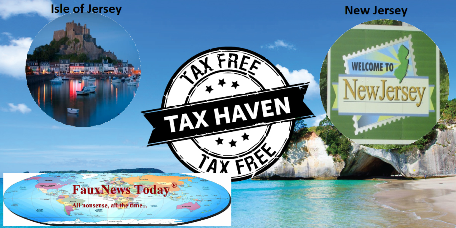 TRENTON, NJ – After the revelation in the Paradise Papers that Apple Computer and other wealthy corporate interests had established subsidiaries and large bank accounts in the UK crown dependency of Jersey, the American state of New Jersey lost no time in declaring itself a tax haven as well. The move was intended to show that the state is a business-friendly place to hang out.

“They may have thought of it first over there, but we don’t let any grass grow under our feet here,” said Alvin Haversham, a spokesperson for the Garden State. “And as offshore seems to be a dirty word nowadays, we’re able to offer people with big bucks the same fancy tax dodges right here in the good old USA, without the stigma and the media-induced guilt.”

Critics of New Jersey however have said that the state has long had an inferiority complex and the change to tax haven status was just sucking up to big money to make New York jealous because the two states have competed for years to become the perceived centre of the known universe.

And the highly unusual move also seems to have caught the office of the New Jersey state treasurer unawares. Leaked memos and e-mails from the treasury department to the legislature seem to indicate this with questions like:  “…..how will the state pay its bills now without tax revenue?” and “What the *&^%$#@# are you idiots trying to do, bankrupt us?”

Media outlets in New Jersey have also called the state to account for establishing what one daily newspaper called “tax sheltered safe houses for financial kleptomaniacs and “corporate welfare.” Another labeled the move “legislative sleight of hand” and submitted that the new tax haven status was “…a shameless attempt at pandering to society’s elites.”

New Jersey makes no apologies however for what it says “changes the tax paradigm for this state.” Proponents of the controversial move charge the critics with “class envy” and one economist called the faultfinders “financial illiterates.”

“It’s not rocket science,” said Haversham. “You have to spend some money to make more money. Everyone pays taxes. Some just pay a smaller percentage, but on a lot bigger bundle. We’re giving up a little to gain a lot.”  Source: FNT Staff