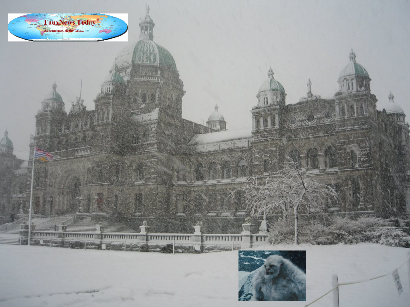 VICTORIA, B.C. – Signs of early non-human habitation found under the Parliament buildings this week appear to confirm the existence of the mythic creature Bigfoot, in British Columbia.

Workers installing electrical conduit in a little-used sub-sub-basement section under the B.C. legislature found strong indications that the area might have once been inhabited by a non-human species. This included coarse tufts of hair and several smudged footprints pressed into the clay sediment near the foundation.

Melanie Hodicka, a cultural anthropologist from Burnaby who works for the province, said her research team was brought in to investigate the evidence. Hodika, a Bigfoot researcher who earned her PhD in cryptozoology at the University of Wisconsin, was excited about the find.

“They just found some rocks in Labrador last week that show the earliest life on earth” she said, pointing to the taped-off area under the 120-year-old stone structure where technicians from the team were setting up equipment to excavate the site. “But what’s the big deal about finding some 3-billion-year-old graphite? This, this, kind of fieldwork, where we can study organisms with flesh and blood, is the real stuff of nature!”

Hodika said that findings like this are extremely rare because the elusive creatures tend to shy away from areas of dense human population. She said that the signs here pointed to the existence of not just one Bigfoot, but possibly an entire family of the mysterious species, that probably used the location as a winter home. She called the discovery “major cool”  and  “a breakthrough!”  The Parliament buildings were evacuated when the evidence was discovered for reasons of public safety.

Raymond Arbuckle, a Bigfoot researcher from the University of Calgary, challenged the evidence found under the Parliament buildings in Victoria, saying that they were “quite unlikely” because all previous sightings of the creature had been recorded in the B.C. interior. “How,” he asked, “did they get all the way over there to the island, from the mainland?”

“It’s possible,” Hodika said, “that they might have used the ferry.” Source: FNT Staff