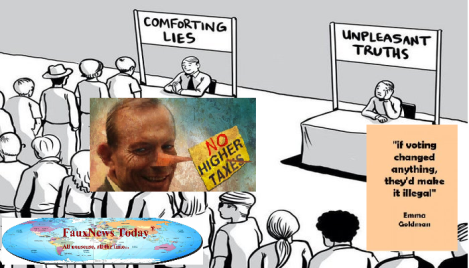 OXFORD – Following an announcement that the country of Cambodia has made outlaws out of politicians, the G7 countries immediately commissioned a study into the effects of making all politicians illegal, everywhere. The report, just released, summarized the findings of the study in the précis as: ‘Might indeed work well. Couldn’t possibly make the world any worse off than it is now.”

The study was conducted by a team in the faculty of political science at Oxford University. Professor Arkady Chagossian Ph.D. explained to FauxNews Today how he and his researchers obtained what he called “entirely predictable results” based on running sophisticated computer models of societies that functioned sans politicians at any level.

“We verified in our computer simulations,” he said, “that people would rather be told things that made them feel comfortable, even if they were lies, rather than face truths that gave them a downer.”

The professor went on to explain that his team was able to simulate extremely stable societal conditions that worked wonderfully well entirely without politicians, by setting up public kiosks with minimum wage staffs that dispensed the same formulaic promises, distortion, obfuscation and  prevarication that people would get by subscribing to a political campaign of any partisan stripe.

“People seem to have a need to be lied to as long as it makes them feel better,” he said. “So all we did was replace one form of it with another. They were even willing to line up and take a number.”

“And the financial benefits alone were astronomical,” he further explained. “The savings for the cost of elections alone ran into the billions.”

The positive results of the computer modeling aside however, Professor Chagossian was not at all optimistic that the team’s lab results could ever be adapted in the real world to become a functional model for societies.

“It would only work if it were actually possible to stop politicians running for public office, and that’s a stretch,” he said. “Because, unfortunately, it’s in the genes.”   Source: FNT Staff