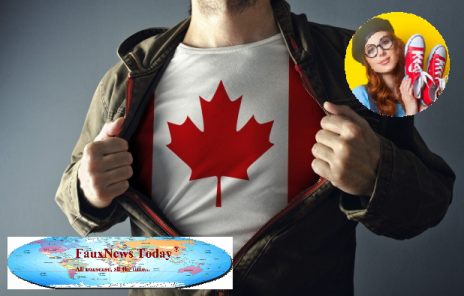 TORONTO– After being rated the best country in the world by millennials, and gathering various other accolades, Canada has surpassed itself yet again with its latest ranking on the countries-of-the-world niceness scale.  Voted “Tops In Congeniality” three years ago and “Nice as Pie” last season, in 2017 Canada achieved “Goody Two Shoes” status; a special award created to mark the country’s one hundred and fifty year anniversary.

Gracious kudos and congratulations poured in from the runners-up in niceness all over the world, places like Norway, Denmark and Sweden. Australia alone, a country once held in very high esteem in the sweetness and light niceness category, was the sole poor loser of the group, muttering nasty things under its breath and then slipping away from the festivities to mope and pout under the stairs.

Several older and more experienced countries observed the celebrations from the sidelines, and at least one grizzled veteran of the popularity wars had a word of warning for the Great White North. Switzerland, a consistent favourite in the “perfect country” sweepstakes in years past and now an also-ran, allowed loudly enough for bystanders to hear that Canada shouldn’t get a swelled head because of all the attention because fame was fleeting and when you were perched precariously at the top, it was a very long fall to the bottom.

Canada, however took the veiled criticism in stride with humility and self-effacement. It noted that it had only ranked as the 6th happiest country in the world in another survey, so it knew it was far from perfect. It then pledged to “set a better example and do its utmost to be happier in the future.” Source: FNT Staff