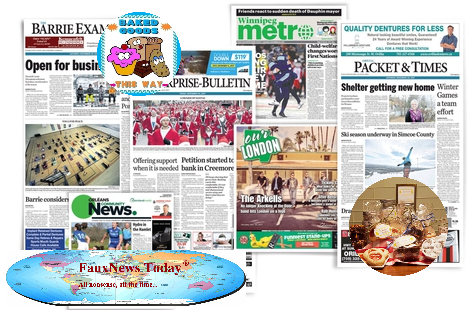 TORONTO– Struggling to stay afloat in a sea of red ink, Canadian newspaper conglomerates have banded together again for their second annual fall bake sale to boost last-quarter revenues to where they might again stave off insolvency. The sale will take place at the Rogers Centre, beginning on Saturday.

Embarrassed as they are at their dire collective circumstances, no single spokesperson would go on record to talk about the event, however an industry source who asked to remain anonymous stepped forward to speak for the group.

“We’ve run the numbers on this,” he said, “and we’re optimistic that this sale may be just the ticket to break the jinx of bad luck we’ve had since the Internet came and spoiled everything for us.” He waved a hand at the plates of brownies, butter tarts and shortbread. “In the past we’ve always been able to cut fat in a bad year. Now we’re going to sell it.”

This latest brainchild to drive revenues comes on the heels of the deal struck by Canada’s two largest newspaper companies to swap more than 40 regional newspapers that previously competed against each other for advertising revenue. Wags are calling the creative business decision: “Newswapopoly”.

The giant bake sale is also seen as a means of near-last resort after the federal government has refused to consider additional subsidies for the struggling industry, which has seen declining advertising revenues for years running.

“We’re not about to throw good money after bad,” said a spokesperson for the government who refused to give his name, as he admitted that he had left work early.

Corporate owners however are sanguine that the home-made sweets extravaganza will save their bacon again this year. It appeared to be doing a brisk business as journalists, editors and interns who had been laid off in the newspaper swap took turns plying their retail skills at the goodies tables.

“We’re already ahead of last year’s numbers,” said a former sports reporter as he rang up a plate of coconut cookies at the register. “If this keeps up, they’ll make enough to cover the executive year-end bonuses.” Source: FNT Staff