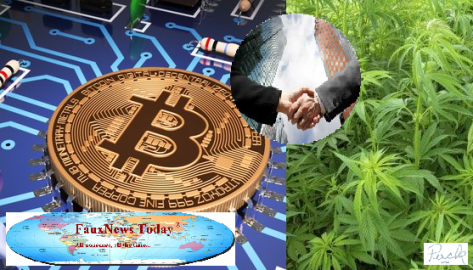 NEW YORK – Rumours began flying around Wall Street on Monday about a potential corporate merger between the spectacularly bullish fiat currency upstart, Bitcoin, and a group of seven marijuana growers and marketers from different countries around the world that banded together to form a cannabis consortium. This near, not-quite-news sent the financial markets into a spin.

Market analysts speculated that although the financial marketplaces didn’t have a lot of details about the rumoured merger as yet, such a corporate bonding would make for a sound investment, because the two industries represent the fastest growing business sectors in the world today.

Bitcoin prices and marijuana stocks spiked sharply upward in early trading on the currency and stock exchanges, then briefly crashed as the AI tradebots that supposedly acted for investors frantically worked to self-adjust their algorithms to the market frenzy, while still looking after their own interests first.

Prices then climbed back up again to stabilize at 3.9 % below where they were before the unconfirmed buzz about the merger.

Trading was abruptly halted twice during the run-up and crash. When prices had recovered to near (but not quite) normal again, one of the market regulators explained to disappointed investors who had jumped in to the market and then lost their capital, why, once the trading had stabilized, prices were now down almost four percent, on supposed good news.

“Well, all the analysts bought in early, before the rumour was made public. And all the bots took a profit, just in case,” he said. “So it really was just another normal trading day and the sheep got fleeced as usual.” Source: FNT Staff