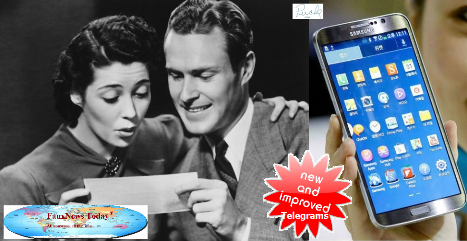 TORONTO – Within days of Belgium closing down its ancient telegram service, (one of the last still operating in the world, with only a handful of customers) a local software developer, Morton Underbraught, has designed and launched an application that replicates the original telegraph model of sending a long-distance message.  His startup company, headquartered in an Etobicoke business park, is setting up a firm to provide old fashioned telegram service to smartphone users worldwide.

“It’s an exciting time,” he said. “Most people today have even never heard the word telegram. “My app is designed to bring the electrical telegraph into the 21st-Century.”

Underbraught seemed surprised to learn that the UK, the U.S.A. and India had all closed down their telegraph systems years ago, citing a dwindling customer market in the age of the Internet and text messaging.

The young software designer was also quick to discount the idea that his app might be just another socially-driven trend with a short shelf life. “Hey, people really value things from bygone days,” he said. “Why else would the scientists be working on reviving extinct species?”

The budding entrepreneur did admit to having to work a few more bugs out of his creation before it gained widespread commercial acceptance. “Of course every smartphone user will have to learn Morse code,” he said.

He also explained that he was having trouble hiring trained telephone operators and was in a hassle with the provincial labour people over the minimum age for telegram boys with bicycles.

Underbraught also shrugged off a negative report from a business analyst that speculated on the commercial viability of adapting and applying a one-hundred and seventy year old technology to today’s modern world.