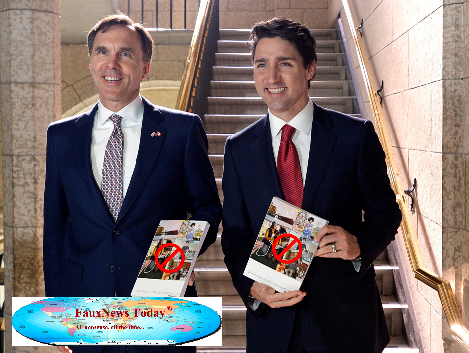 OTTAWA – The workings of Canada’s federal government came to a grinding halt on Thursday when a team of forensic chartered accountants reported a suspected rounding error in the 2017 budget document. The revelation threw the treasury board clerical staff into a tizzy and sent economists across the country scrambling for their calculators to project the potential damage to the Canadian economy.

“We’re definitely in non compos mentis mode here,” said a treasury board insider who declined to give his name as he said he feared he would be targeted for retribution if they knew he had finked. “The government has stopped issuing checks and payments until we know for certain if Canada actually has any money.”

The S&P/TSX Composite index immediately swooned by three-hundred points when the news of the bumbled budget broke, and the Canadian dollar also took another tumble, bottoming out at .7760036521 cents American.

The word of the government’s latest crisis of confidence spread like a wildfire, on social media. Within minutes after the story aired on CBC, a group of federal employees paraded around the Centennial Flame on Parliament Hill carrying picket signs and chanting: “We’re mad as Hell and we’re not going to take it anymore.” One of the worker’s signs read: “First it was Phoenix, now this!  Get it together Justin!”

A government tiger team of seventy-three specially-trained economists, chartered accountants and baristas worked through the night to track down the errant decimal point and analyze the damage. They were forced to do their calculations with abacuses by candlelight and brew coffee on Coleman stoves as Hydro Ottawa had switched off the power for non-payment and refused to turn it on unless the bill was settled in cash.

At three o’clock on Friday morning one of the accountants shook his beads in the air and called for calm. He said that his group had found the pesky rounding error and Canada wouldn’t have to declare bankruptcy after all. “We’re still golden,” he said. “The original budget was only off by eighteen dollars and sixty-one cents.”

“Thank God for that,” another one said. “Because we’ve all been on overtime for the last eleven hours.” Source: FNT Staff